Veröffentlicht von Shortcut IT in Sc4SAP · 24 September 2019
The "Copy user" function in "Shortcut for SAP systems" offers a lot of possibilities. It is very handy, quite fast und very flexible. Here are some use cases that can be covered with this function.
So let's have a look at the "Copy user" function. The most valuable features of it are in my opinion:
It is so easy. For storing all users of a client just a few steps are necessary and the users are stored in a file. Specify source and target (in this case a file on your computer), press the "Execute" button, that's it. In this example we use a file on our computer for storing the users, therefore an SAP connection using a user with dialog capabilities is needed. In case you copy the users from an SAP client directly to another one or you use a file on the SAP system you can also use a connection with a system user. 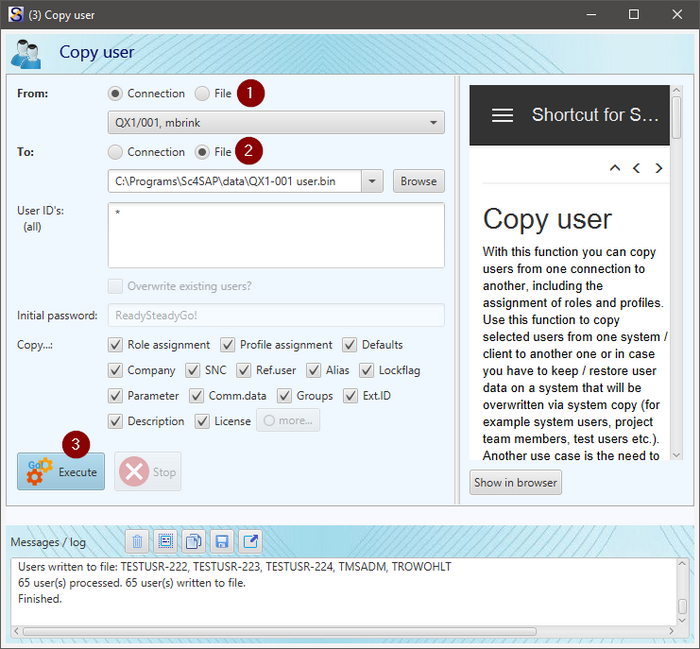 In this example only a small amount of users are in the source client which of course results in a small data file. But also for clients with a huge amount of users the procedure works reliable. Data files will be splitted at a filesize of approx. 100MB, the filename will be extended by ".Partn" where n is incremented. Sc4SAP stores an ".info" file beside the data file on your computer. Keep data file(s) and ".info" file together in the same directory.
Now let us use the file to copy them into another client (here: 100). We select the file as the source and address the client 100 in the system as the target.
For creating the file we didn't restricted the amount of users and took all ("*"). Sc4SAP now offers all users for which is data in the selected file. Having a look at them there are some I don't want to copy because they already exist in client 100, therefore I leave the "Overwrite" flag empty and don't change the user ID's in the text field. But the possibility is there, and in case you want to reduce the amount of users to be copied you can do that! 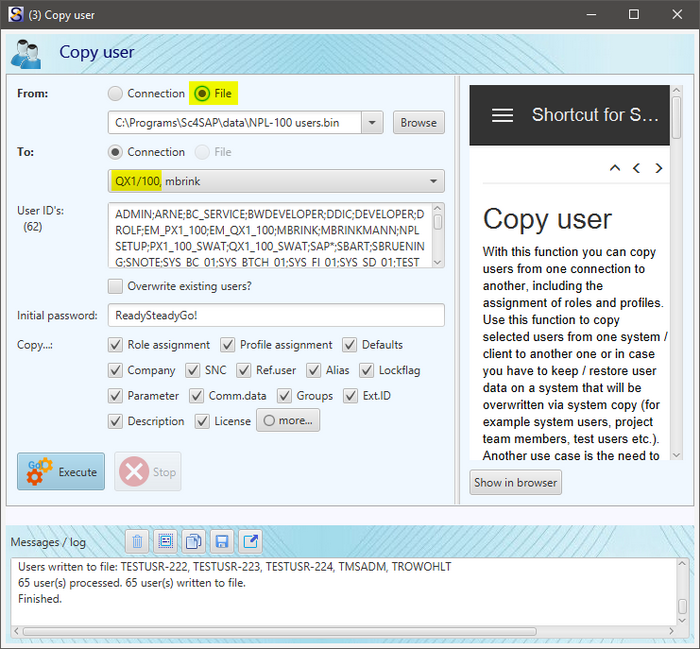 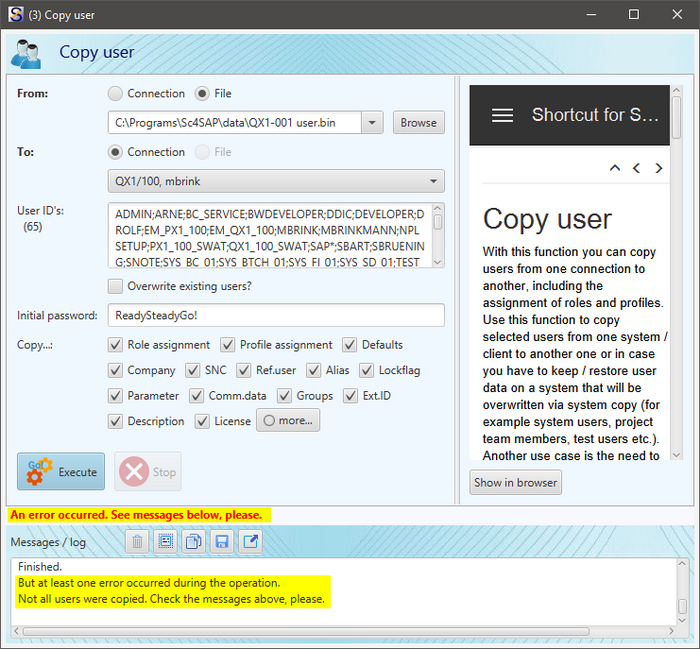 Ok, have a look into the messages for what the user copy process is claiming about. By using the most right button above the messages we see it all a little bit more comfortable than in the small message area. Obviously it is a general problem with the address data: 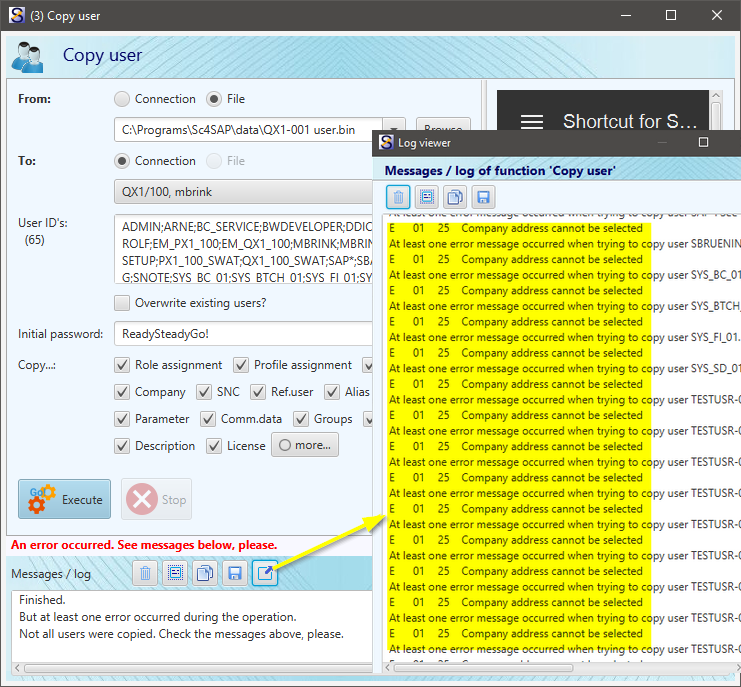 Now it looks better, the copy process is working and it's quite fast. After some seconds it is finished. 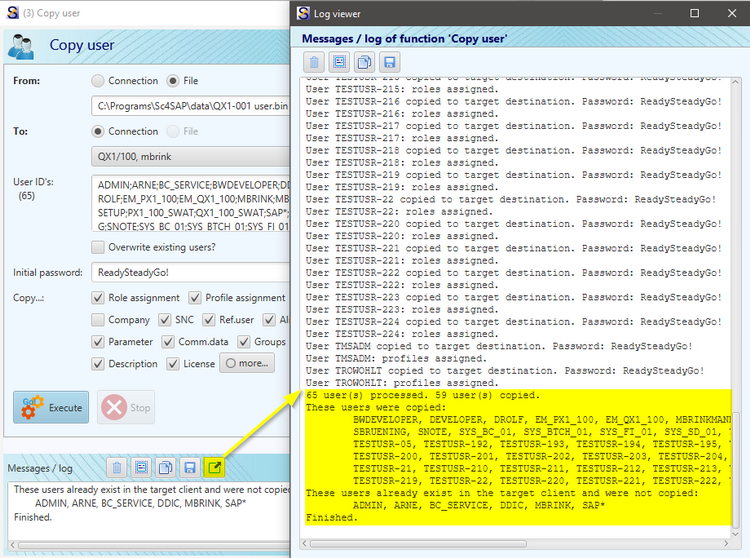 Now it looks fine. Already existing users were not copied, but the others were. If I had chosen to overwrite users the user used in the SAP connection should not be specified in the input field for the User ID's! During the copy process the authorizations temporarily get lost which would cause an abort of the copy process. Also overwriting of the own user should be well considered - in this case it's the same.
So finally 59 users were copied successfully to the target client. I did not have to struggle with a CUA or an Identity Management system, I did not need to maintain RFC connections or wait for others to maintain RFC connections. I can use the same data file to copy the users again, possibly into the same client after a system copy or another client on another system.
But there is still one issue: the passwords. Maybe you recognized that there is an input field in the copy function for the initial password which I filled with a value. In case you leave it empty a password will be generated (you will get the individual passwords in the messages). In case you missed this somehow: there is nothing that can not be done afterwards with the "Set password" function which gaves us the possibility to assign the same initial password or assign randomly generated passwords.
"Shortcut for SAP systems" uses the function modules from SAP which are intended to deal with the users. To name the most relevant here: BAPI_USER_GET_DETAIL (for reading the user from the source client) and BAPI_USER_CREATE (to create the user in the target client). The function modules don't offer the possibility to copy also the passwords.
If it's ok that the users will have either the same password (as given in the "Copy user" function) or a randomly generated password, then the job is finished here. The users exist in the target client and it took only few minutes. We can use the same data file for other clients, either on the same or another system. This procedure looks suitable e.g. to create a base stock of basis and system admins and some system users on every new client and can be carried out easily and fast.
If your aim is that the copied users will have the same passwords than in the source client we have to do an additional task: copy the USR02 entries for the copied users (the USR02 table is an essential table for the users on the system and contains the individual passwords, stored in hash values). This can be done with the "Download / Upload table data" function. For avoiding that the password will be changed for users that will not come with the data file we reduce the download to the specific amount of users by giving a "where" clause.
After pressing the "Execute" button an SAP screen comes up with a confirmation message. For continuing your work in Sc4SAP you have to press the "Back" button in the SAP window, otherwise Sc4SAP does not recognize that the SAP system has finished its task and still waits for the completion. 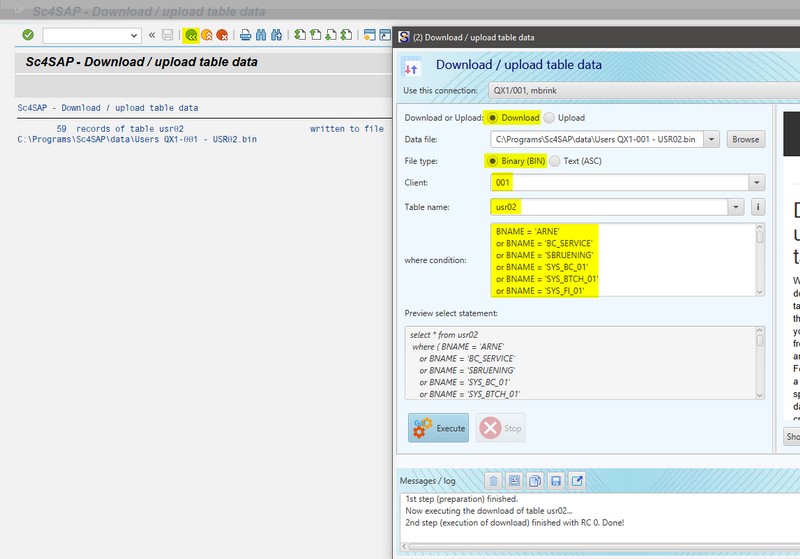 After 2 seconds an SAP screen appears: 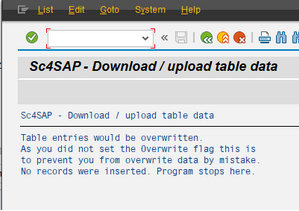 Ah, ok. There are already USR02 records for the 59 users, and overwriting them is exactly what I wanted to do. I forgot to set this flag in the dialog:

After setting this flag and a new execution I received what I expected: 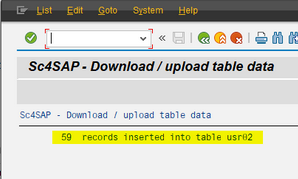 The users in the target client now have the same passwords as in the source client.
Consider that, due to the fact that we copied the USR02 records, also attributes like the lock status have been copied. Therefore there might be the need that you have to unlock users.
I don't want to finish this article without giving some warnings and hints:
- In the "Copy user" function you should take care that the user used in the SAP connection will not be overwritten. Otherwise the copy process might abort because during the copy operation the authorizations of the user gets lost (at least temporarily, but that would be enough to abort the task).
- The function for downloading/uploading and deleting table entries is very critical! Please, please be quite sure what you are doing with these functions.